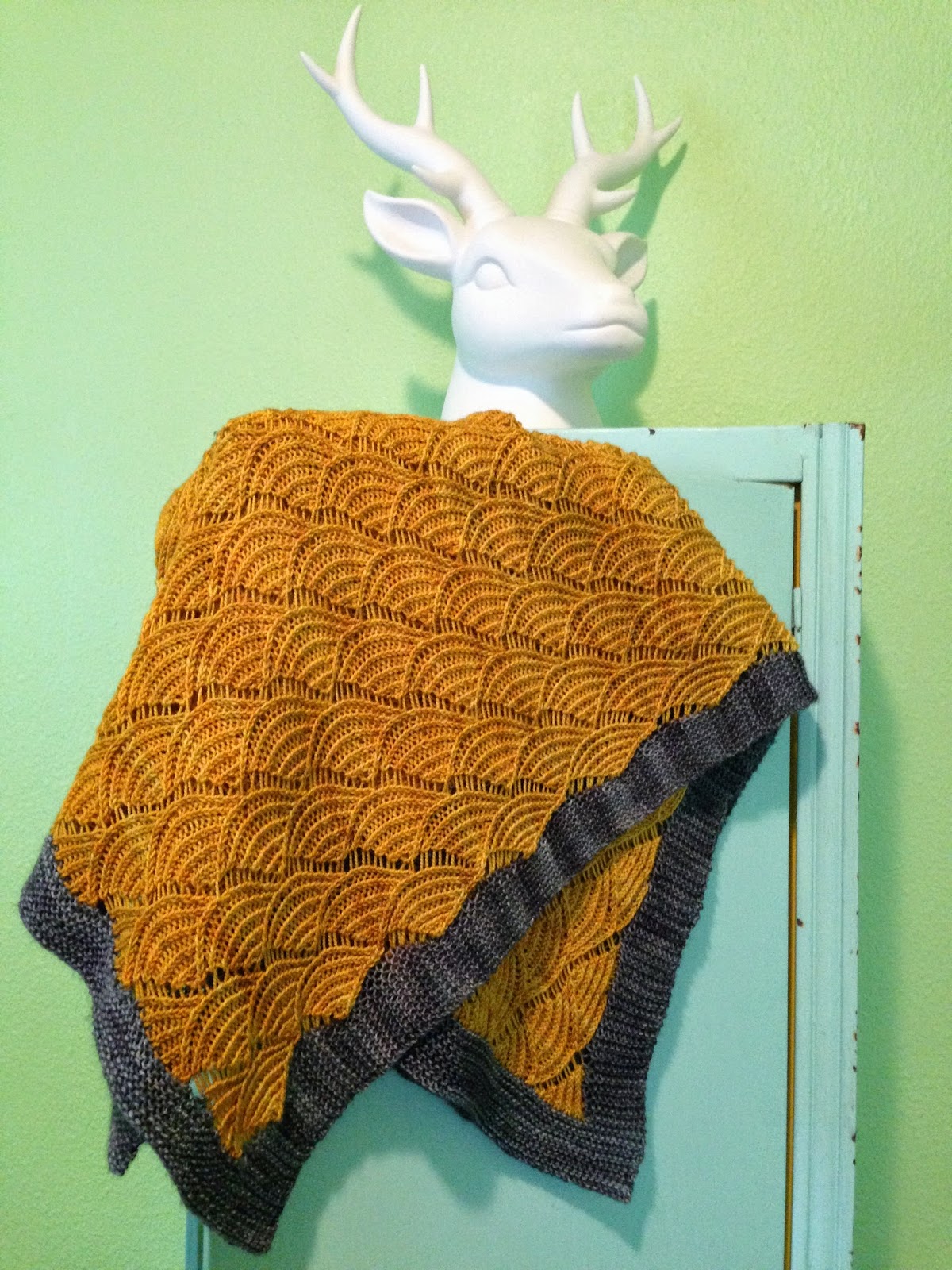 We found out that we were pregnant after my husband moved to Northern CA from TN leaving me in TN to sell the house and get things ready to move out. Soon after was Valentine's Day and I received the most unexpected gift in the mail. The sweet man had sought out a local yarn shop and bought me 3 skeins of Madelinetosh Sock Yarn with a note that said "I know you'll want to make the baby a blanket, this is for both of you."

I've played around with blankets before and I hate how most of them, though they may be stunning on one side, are unfortunate looking at best from the back side. This is a blanket that I hope The Bean carries around with her for years to come. I wanted it to be the same front and back. After some playing around with stitch patterns I finally came up with something that was interesting, beautiful, front and back along with having a bit of lace to allow her to stick her fingers though, which I know babies like to do with their blankets. I've done this twice now and couldn't be happier, so I thought I'd share with you. 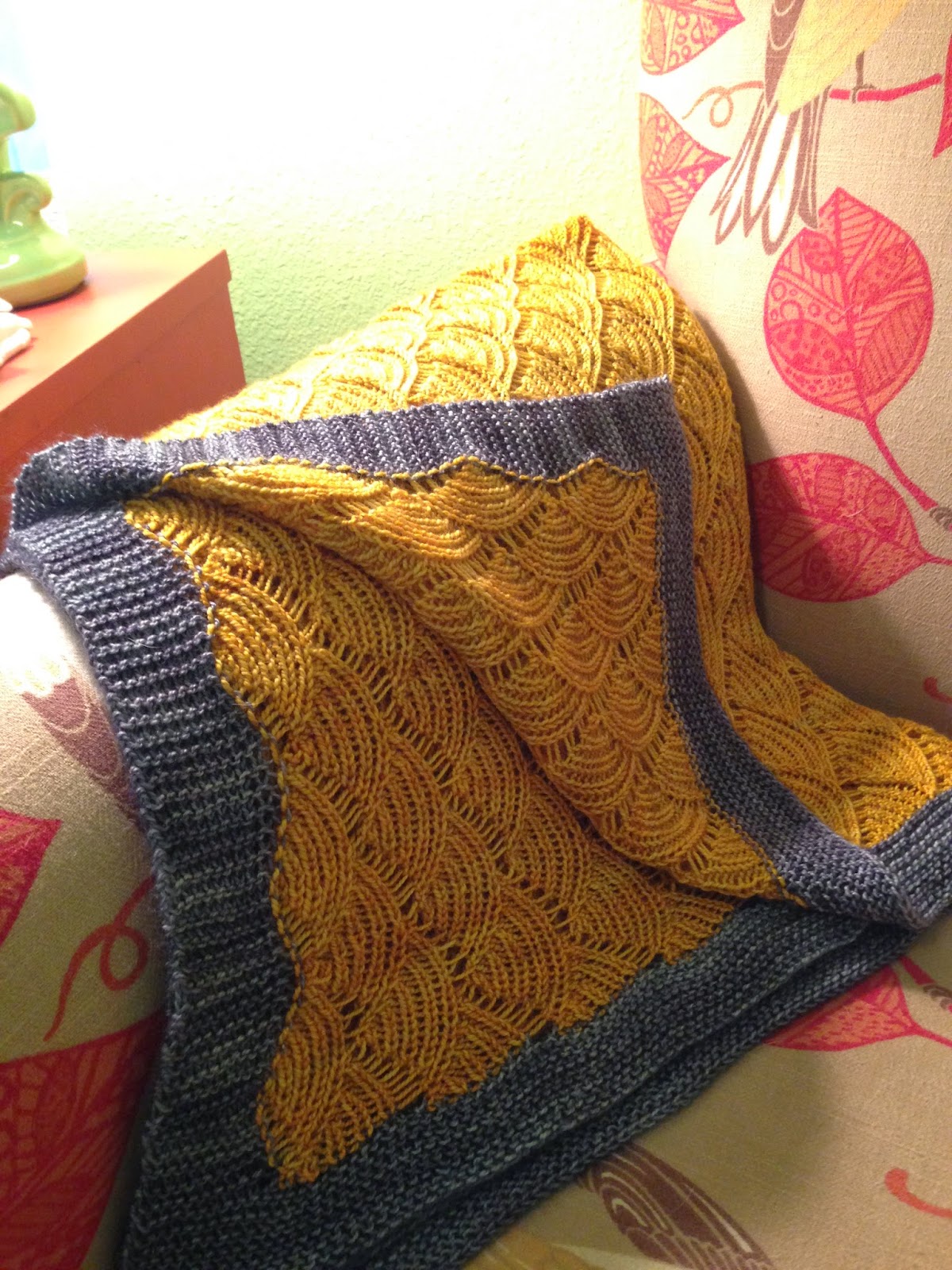 Smells Like Decaf
Notes: You can increase the width by adding in increments of 12.
This pattern does block out much wider than it appears to be as your knitting. My finished measurements are 33"x33".
I chose to use high quality sock yarn because of its wash and wear. This is not something I would suggest cheaping out on, though you could really use any yarn you wish.
All stitches should be made on the twist, meaning you're either knitting through the back or purling through the front. This allows for the proper lilt in the stitches.
I have charted row 22, but in order for it to work out see the detailed notes on Row 22, I put a reminder on the chart next to row 22 should you forget ;)

In Contrasting Color (CC) CO 188 stitches
Knit in garter st for 14 rows
Set up Row: This is the point where I split the the CC yarn and pulled from both ends, you may choose to initially split the yarn and wind two balls instead of pulling from one. From this point on the first and last 10 sts are in the CC knit in garter stitch, be sure to wrap your yarn accordingly when joining with MC.
K 10 in CC, join MC, [Yo, k2tog, (p1, k1) five times] K10 in CC
Row 2: K10 in CC start on Row 2 of the 12st, 22 row chart repeat.
Rows 3-21: Follow chart
Row 22: (WS) M1 [(k1, p1) x5, yo, p2tog] until last two sts of repeat, DO NOT YO, p2tog
The purpose of this is to keep there from being a weird break in the pattern, allowing for the scallops to be continuous.
Continue with rows 1-22 of chart until desired length (or you're almost out of yarn ending on either row 11 or 22)
To finish K 14 Rows garter stitch in CC - BO - Weave in your ends.

Don't be afraid to stretch as your blocking, this is a very stretchy pattern!

I'm completely new to charting so please feel free to message me on Ravelry if I've made a mistake or you have questions. I've written out each row of the pattern below the pictures if desired. 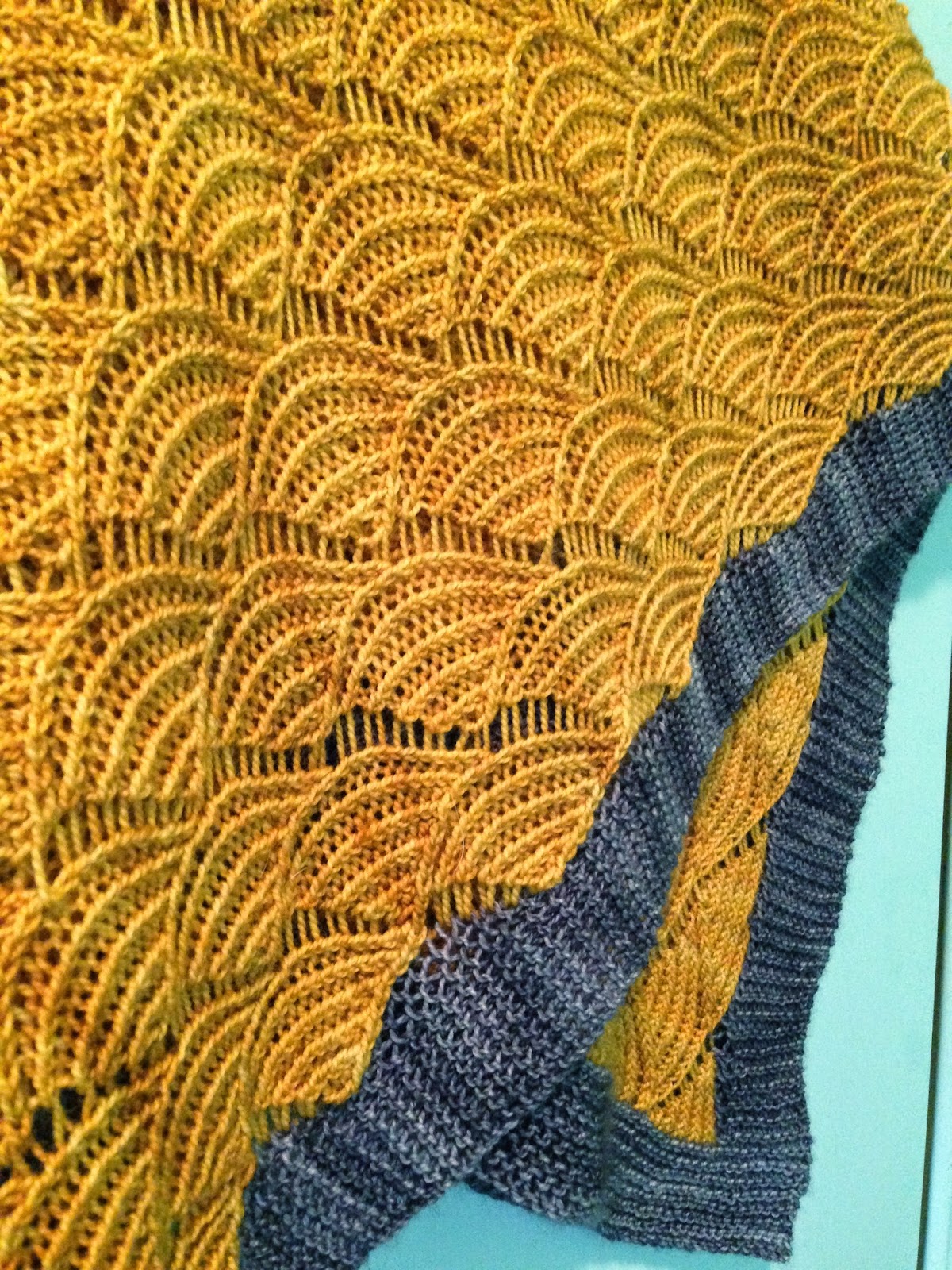 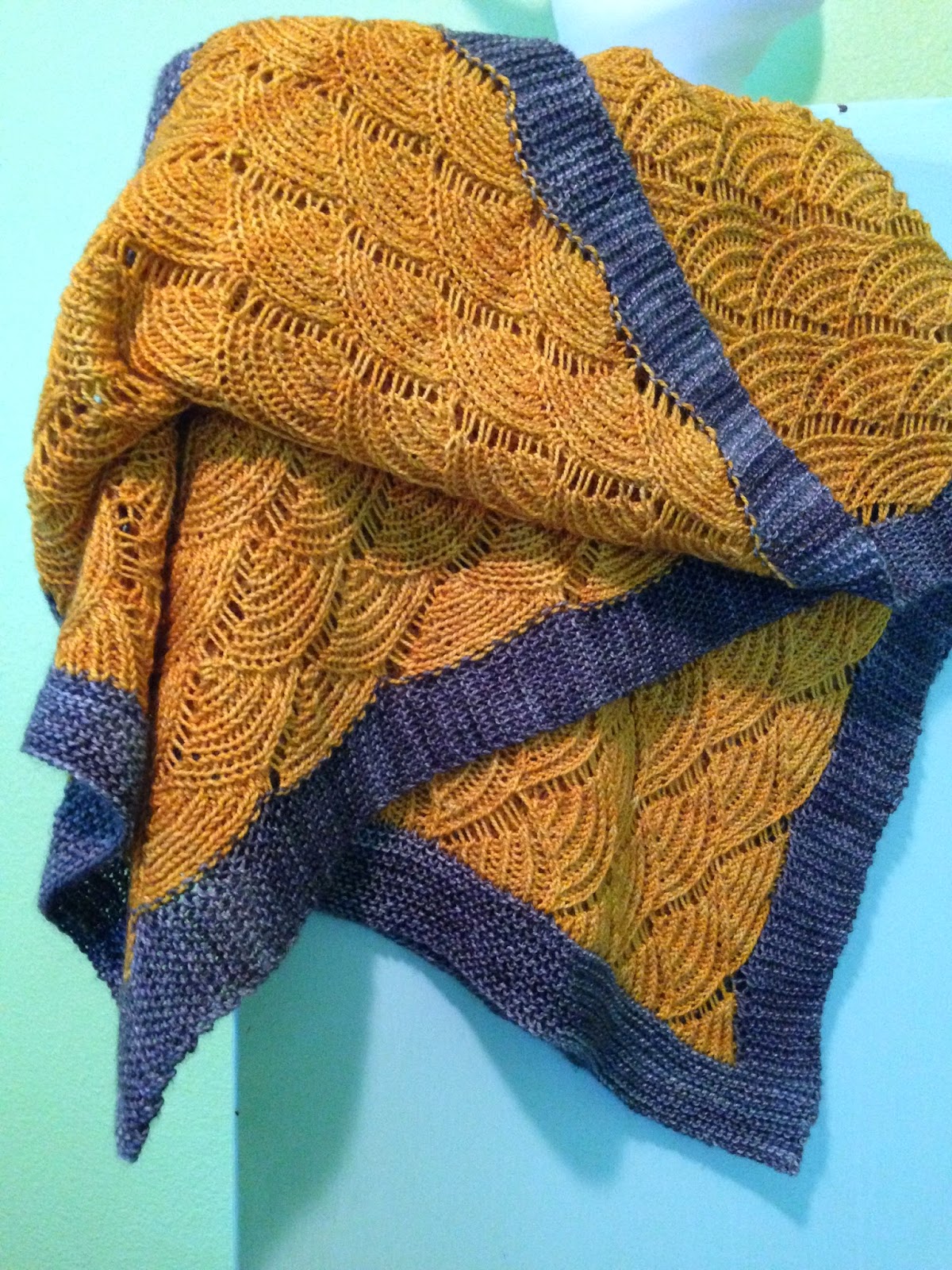 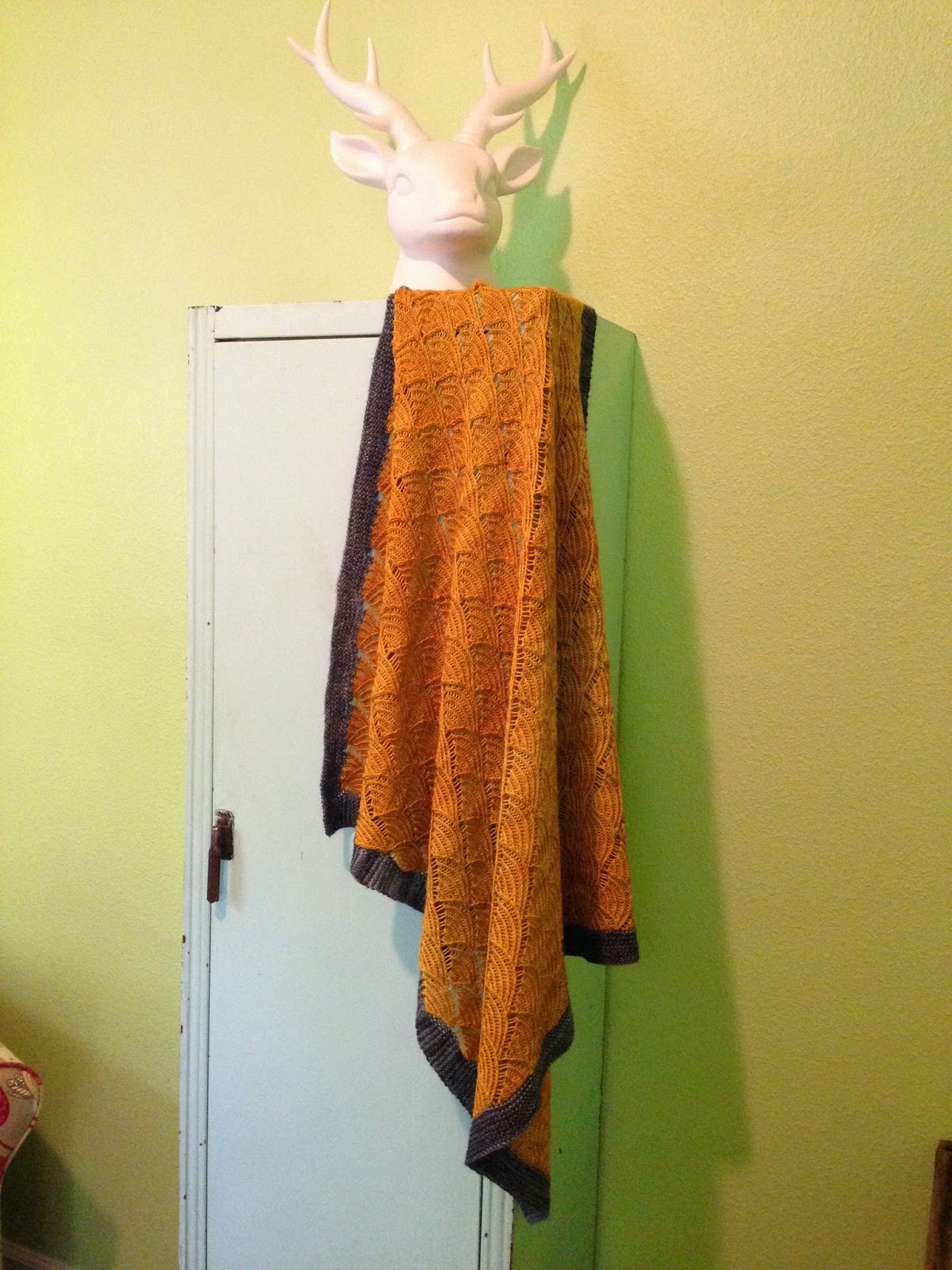 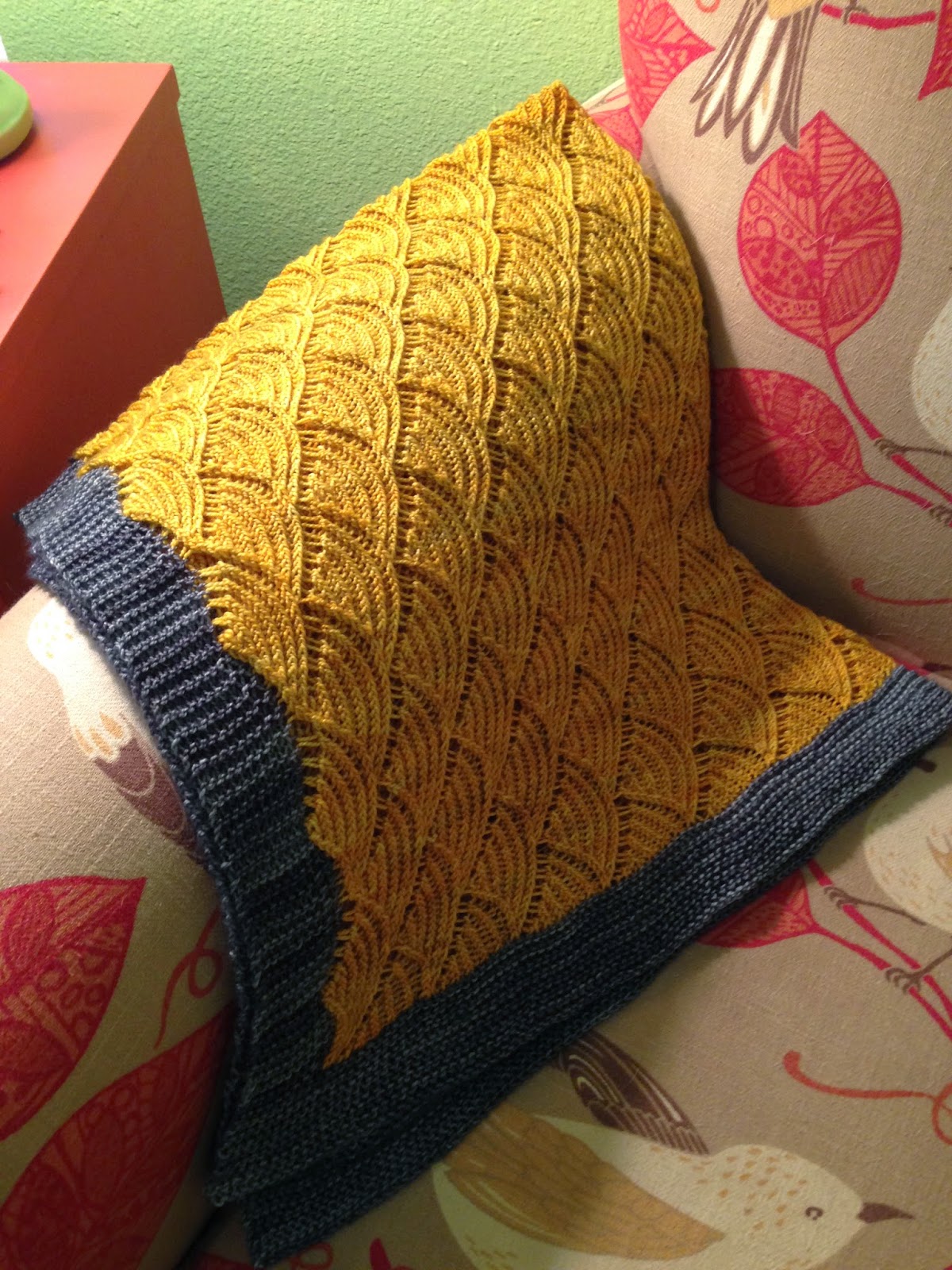